Paved Bike Trail along the Atlantic Coast in Northeast FL

Amelia Island has over 18 miles of multi-use trails, paths, and bike lanes. The Amelia Island Trail is a paved asphalt trail that runs parallel to A1A from Amelia Island State Park to Peters Point Park in Fernandina Beach. It's part of the East Coast Greenway (Maine to Key West). (Map link and photos below.) 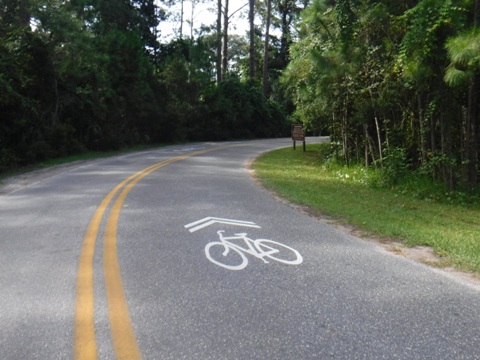 Biking and Hiking on Amelia Island

Amelia Island State Park offers parking, restrooms, picnicking, beach, showers, fishing, birding and paddling. From here, the trail runs north along A1A to Fernandina Beach. Other trails on the island run on sidewalks along or on the roadway. Traffic in some areas can be busy and there are many driveway and road crossings, so take care. To continue to old historic Fernandina Beach, follow the Burney Park to Greenway Trail (see map) to Atlantic Avenue. - or bike along A1A. Off A1A is also the entrance to Fort Clinch State Park. From parking lot to trail At the south end the trail connects to the Timucuan Trail across the A1A bridge over Nassau Sound to Big Talbot Island. Note: at last check, bicycling is allowed over the George Crady Bridge Fishing Pier State Park. Along the pier, new A1A bridge to the left Fernandina Beach, the northernmost Florida city on the Atlantic coast, was designated as a Bronze Level Bike Friendly Community by the League of American Bicyclists. Easy to ride - the historic streets are bikeable and scenic. We particularly enjoyed the Historic Downtown District along the Amelia River with its restaurants, shops and interesting architecture. Dating from the late 19th and early 20th centuries, the 50-block district is listed on the National Register of Historic Places. Nearby the Old Town Historic District is site of the last Spanish city platted in the western hemisphere - it retains the original 1811 plat and historic homes. Nearby Places of Interest

Fort Clinch, now a Florida State Park, is one of the best preserved 19th century forts. It lies along the St. Mary's River between Florida and Georgia, built to protect the entrance to the River and Cumberland Sound. First fortified by the Spanish in 1736, the U.S. built the fort after the Second Seminole War in 1847, then it was briefly seized by the Confederacy in 1861-62 before returning to Union control where it was a base of operations throughout the Civil War. Now on the National Register of Historic Places, reenactments of life at the fort are staged by park volunteers. Biking is allowed on the Park road (3 miles, early or late for less traffic), on an unpaved multi-use trail (6 miles), and on the beach (at low tide). The Park also offers parking, restrooms, a Visitor Center and Museum, picnicking, playground, beach, hiking, fishing.